China’s Global Times government propaganda outlet admitted on Monday that organizers of the 2022 Beijing Winter Olympics are growing concerned that this year will bring “one of the coldest winters ever,” posing a threat to the health of the athletes.

“Extreme weather,” as the newspaper describes it, could result in hazardous conditions for the practice of winter sports and the potential of such a situation raises questions regarding the International Olympic Committee (IOC)’s process in choosing Beijing as a host city for an event occurring in February. The IOC was similarly under fire in 2016 after athletes complained that water venues for the Summer Olympics in Rio de Janeiro were dangerously polluted and the socialist government at the time had done little to improve their status.

Human rights activists launched a global boycott movement against the Beijing Olympics already in response to China’s ongoing genocide campaign against the Uyghur people of East Turkestan, as well as a long list of other human rights atrocities the host country is committing. The IOC has ignored calls to relocate the event.

The Global Times, citing the Olympics head of “meteorological security,” asserted that the Communist Party was well-prepared for harsh winter conditions.

“As the city of Beijing is expected to experience one of the coldest winters ever this year, which could be subject to other weather extremes,” the Global Timesasserted, “Beijing Winter Olympics meteorological security researchers said the organizing committee has prepared for various weather conditions to ensure that the outdoor events will not be affected by sudden weather extremes.”

The propaganda newspaper noted that Beijing’s was already facing “a severe cold wave” conditions in November, “23 days earlier than usual,” and blamed the conditions on the weather phenomenon known as La Niña.

“Many in this field believe that due to La Nina and changes in the atmospheric circulation, the northern parts of China are likely to experience an extremely cold winter, including the host cities of the 2022 Winter Olympics, Beijing and Zhangjiakou, North China’s Hebei Province,” the newspaper noted.
Among the concerns for athletes is the potential of improperly landscaped sports venues or extreme weather delaying the transport of injured athletes out of a venue. Hypothermia may also be a concern.

Olympics meteorology expert Wang Gengchen insisted in the Global Times piece that extreme snow or cold would not present a problem for athletes. 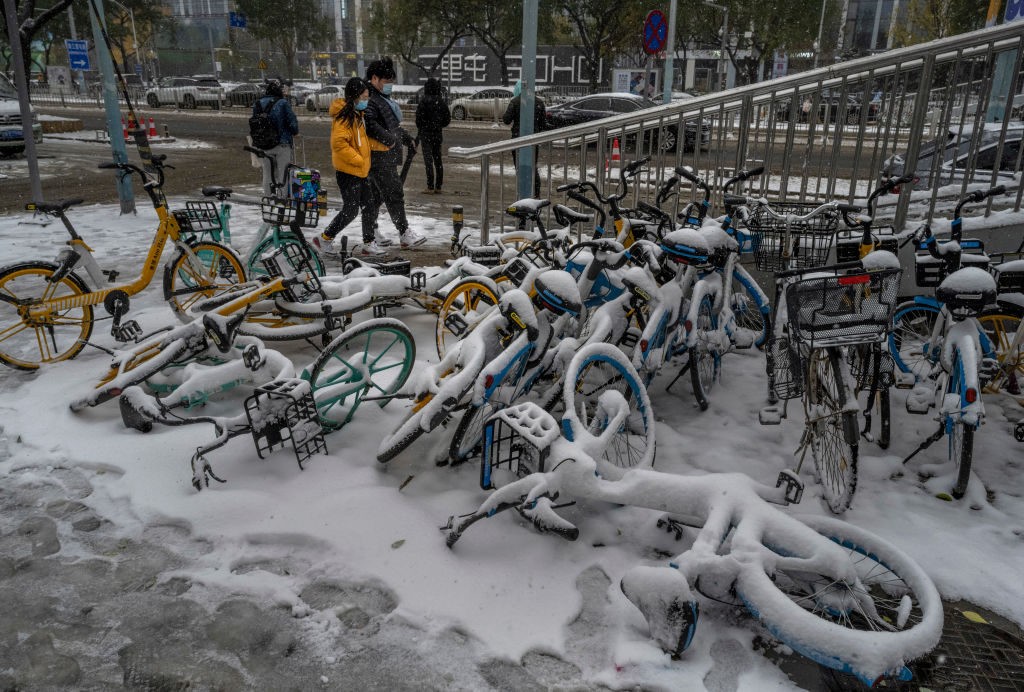 People walk by bicycles covered in snow following a snowfall on November 7, 2021 in Beijing, China. Beijing, which averages less than seven days of snow annually, is set to host the Beijing 2022 Winter Olympics next February. (Kevin Frayer/Getty Images)

“The weather department feels tense about the potential extreme weather this winter, but we are confident because it has already previewed almost every situation,” Wang told the Times. “With the support of government departments, including the Ministry of Science and Technology, a large number of meteorological scenario studies were done, and unprecedentedly high requirements for detailed weather forecasting were put forward.”

Wang appeared to place heavy emphasis on the fact that China would flood venues with artificial snow, which is easier to keep safe for winter sports than natural snow.

“Insiders said that the entire process will strictly comply with low-carbon, clean and green standards, and that concerns about the energy consumption of snowmaking are unfounded,” according to the Global Times.

The IOC has not addressed in any significant way the potential unsuitability of Beijing as a Winter Olympics venue. The Communist Party faced similar, though opposite, weather concerns in 2008 when it hosted the Summer Olympics and addressed them by debuting a “weather machine” that would, in theory, dispel any rain.

“If rain threatens the opening or closing ceremony, Beijing officials say they will set up several banks of rocket launchers outside the city to seed threatening clouds and cause them to release their rain before it reaches the capital,” NBC News reported at the time.

Weather ultimately did not interfere in the 2008 Olympics, which were instead marred by widespread human rights abuses. Environmental conditions also appeared to do little to cause concern in the IOC for the athletes participating in the 2016 Rio de Janeiro Olympics, who navigated water so dirty that it ruined their boats and endured a long list of violent crimes at the hands of local bandits. 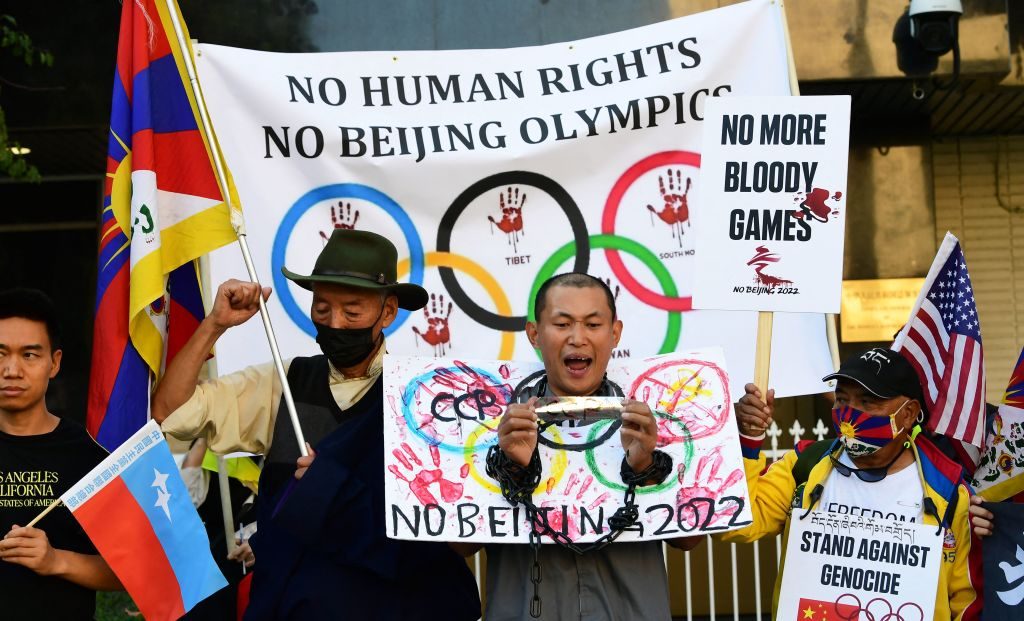 Activists rally in front of the Chinese Consulate in Los Angeles, California on November 3, 2021, calling for a boycott of the 2022 Beijing Winter Olympics due to concerns over China’s human rights record. (FREDERIC J. BROWN/AFP via Getty Images)

Like the Rio de Janeiro Olympics, where health experts warned an outbreak of Zika virus could become a pandemic if athletes brought the disease home, Beijing is facing a formidable resurgence of Chinese coronavirus, which is currently fueling an actual ongoing pandemic. The Communist Party is currently attempting to subdue and outbreak that has affected 20 of its 34 provinces and shut down multiple neighborhoods of Beijing and forcing the postponement of the Beijing Marathon. China’s hestitance to host a marathon despite its outdoor nature – experts believe coronavirus spreads less efficiently in outdoor settings – raises questions about the safety of indoor sporting events or event similarly outdoor events schedule to occur at the Olympics.

Organizers of boycott efforts against the Beijing Olympics have objected not to safety concerns of athletes, but to honoring Beijing with hosting duties while as many as 3 million Uyghurs and other Muslims languish in Party-run concentration camps.

In February, a year out from the event, a coalition of 150 human rights groups signed a joint letter urging the IOC to cancel or relocate the Beijing Olympics.

“Anything less” than a global boycott, the letter read, “will be seen as an endorsement of the Chinese Communist Party’s authoritarian rule and blatant disregard for civil and human rights.”