The Chinese Communist Party fired two senior officials in Shaanxi province this weekend in response to the worsening Chinese coronavirus outbreak in Xi’an, a northern capital of 13 million people.

China’s state-run Global Times communist propaganda outlet warned on Sunday, citing Chinese regime “experts,” that the situation in Xi’an would get worse before it got better, as the number of cases documented daily showed no signs of slowing down. Authorities believe the outbreak in Xi’an is driven by the spread of the delta variant of coronavirus – not the milder omicron variant currently believed to dominate American cases – and have locked down the city in response.

The Communist Party locked down Xi’an – home to one of the world’s most important ancient Christian artifacts, the Nestorian Stele – on December 23. Since then, residents trapped in their homes have used Chinese social media outlets like Weibo to complain that they are running out of food and authorities have not provided supplies, leaving them to starve.

Chinese government media outlets claimed this weekend that officials in the city had finally begun distributing vegetables to city residents, essentially under house arrest by the millions, after widespread complaints made headlines in the West.

The Hong Kong-based South China Morning Postreported on Monday – citing the People’s Daily, the official newspaper of the Chinese Communist Party – that the Party had fired two officials to “further strengthen epidemic prevention and control in the Yanta district of Xi’an.” The newspaper reportedly identified the two officials as Wang Bin, Communist Party secretary of the district committee, and Cui Shiyue, who worked under Wang. 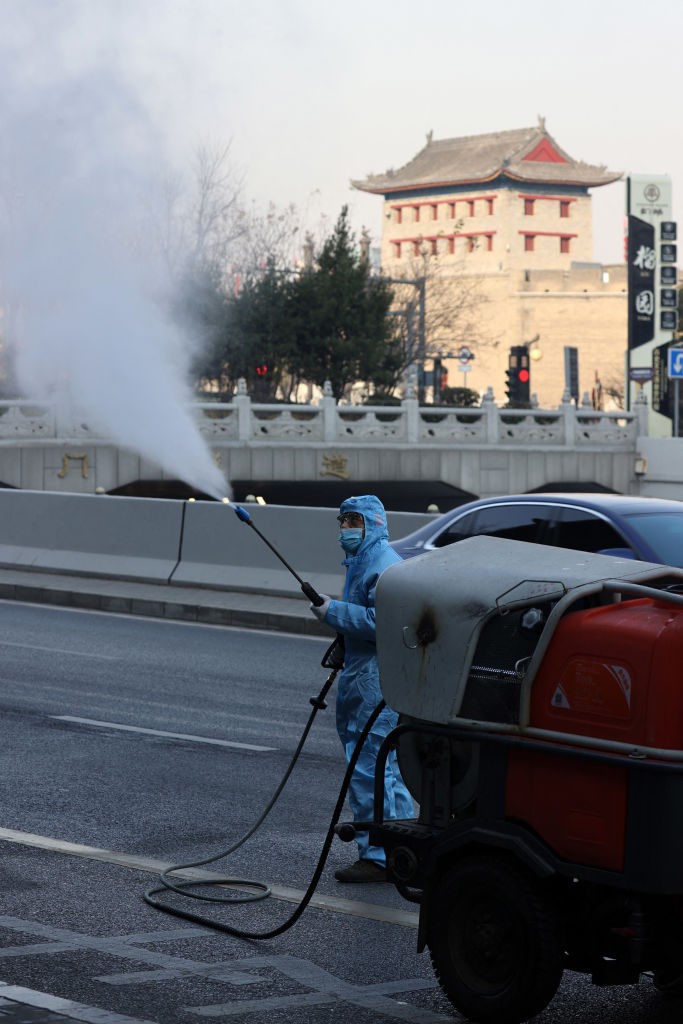 The Global Times appeared to echo the People’s Daily report on Sunday in an article that predicted the situation in Xi’an would continue to worsen despite the purge.

A Party-approved “expert” told the Global Times that Xi’an had not yet reached an “inflection point,” meaning cases would likely continue to rise before they dropped. China has been claiming about 150 cases of coronavirus a day in Xi’an in the past week; the Communist Party routinely lies about its case counts and admitted to simply not counting confirmed asymptomatic cases in March 2020.

Xi’an residents, using the Chinese state-controlled social media outlet Weibo, have complained from captivity that their primary concern has been procuring food during a lockdown in which officials banned them from leaving the house to buy any.

“I’m about to be starved to death. There’s no food, my housing compound won’t let me out, and I’m about to run out of instant noodles … please help!” a Weibo user in Xi’an wrote last week.

“How do we live? What do we eat? Days ago, we could go out once to buy groceries but that’s been canceled. All online grocery apps are either sold out or beyond the delivery range,” another lamented.

To limit the embarrassment, the Communist Party began flooding Weibo this weekend with images of alleged Xi’an residents receiving shipments of vegetables. 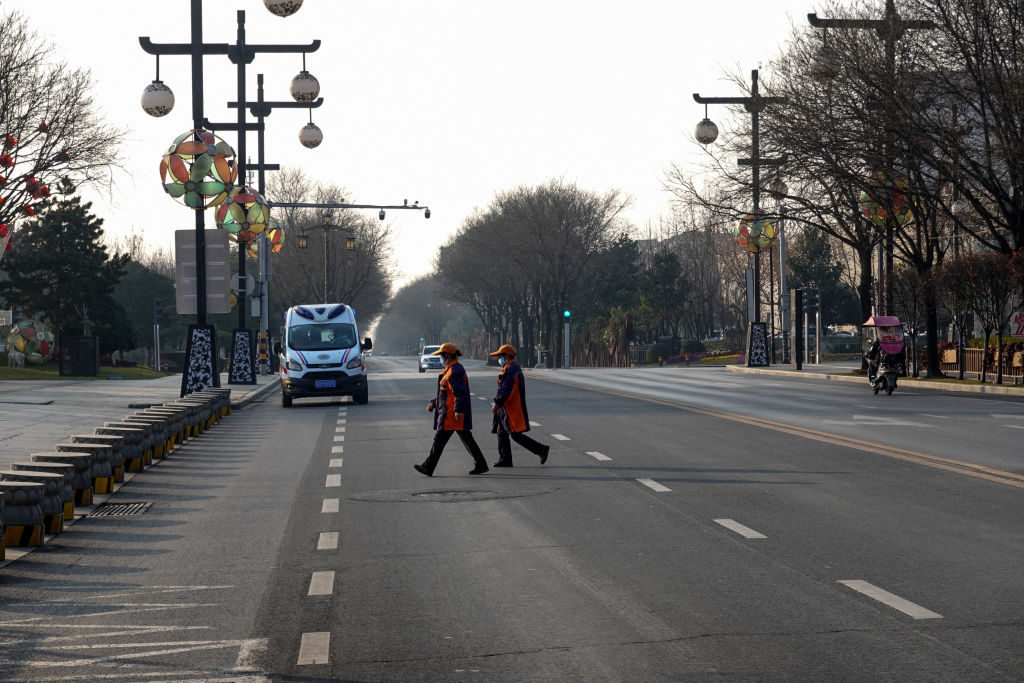 People cross a road in Xi’an in China’s northern Shaanxi province on December 31, 2021, amid a Covid-19 coronavirus lockdown. (STR/AFP via Getty Images)

“City government officials said at a press conference on Friday that they have organized five large-scale vegetable wholesale markets to ensure stable supply of vegetable with daily supply to reach 13,000 tons citywide,” the Global Timesclaimed on Saturday. “On China’s Twitter-like Sina Weibo, some local residents posted photos of the fresh produce they received on the first day of 2022.”

The Global Times claimed that local officials were sure that “supplies of essential goods remain adequate” and would implement free delivery services.

China has failed throughout the past year to contain Chinese coronavirus outbreaks nationwide, locking down major cities in nearly every region of the country. The coronavirus situation worsened significantly after the October holidays to celebrate the founding of the Communist Party, during which the regime typically encourages “red tourism” to sites of historical significance. 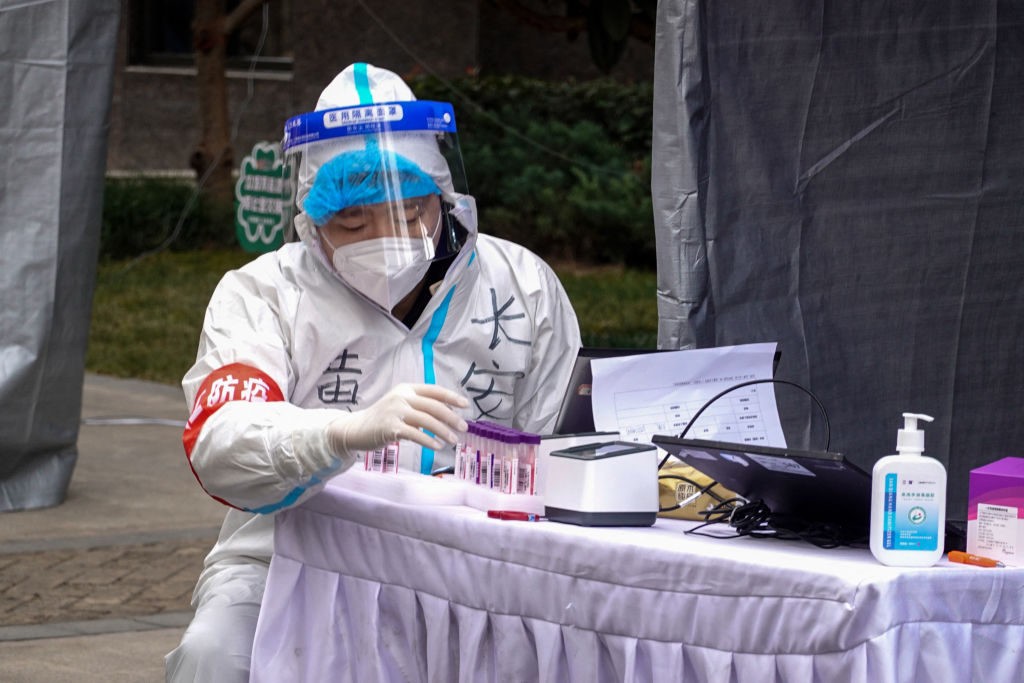 A health worker collects a sample to be tested for the Covid-19 coronavirus in Xi’an in China’s northern Shaanxi province on December 30, 2021. (STR/AFP via Getty Images)

Authorities identified a tour group from Shanghai as being responsible for an outbreak in Inner Mongolia that spread throughout the north of the country and also prompted a Shanghai lockdown and sporadic lockdowns near the Chinese border with Myanmar. Despite finding no evidence to back this conclusion, Chinese authorities blamed frozen food from abroad for the outbreak caused by Shanghai tourists. International scientists widely agree that contracting Chinese coronavirus through surfaces is highly uncommon.

Chinese government officials have not confirmed if a relationship exists between the Xi’an outbreak and the Shanghai tour group outbreak in October. Officials have admitted, however, that the situation in Xi’an is severe and the outbreak is currently in an “intensive” stage that may jeopardize China’s already controversial hosting of the 2022 Beijing Winter Olympics, scheduled to begin in a month. Several neighborhoods in Beijing have implemented lockdowns in the past two months and authorities have restricted entry into the city, locking down trains and halting flights. Last month, the Communist Party banned local officials from leaving Beijing, fearing embarrassment if Communist Party members fled en masse shortly before thousands of athletes and foreign officials entered the capital for the Olympics.