Chinese state outlets and government-censored social media users unleashed a “tsunami of anger” against the American computer chip maker Intel on Wednesday in response to news that the company sent a letter to Chinese suppliers warning it not to source products from Xinjiang.

Xinjiang, China’s westernmost occupied region and known locally as East Turkistan, is home to hundreds of concentration camps used to torture, indoctrinate, and enslave locals, the majority of them members of the Uyghur ethnic people. Survivors of the camps have testified to systematic torture and rape, the elimination of Islam and the Uyghur language, and mass forced sterilization to ensure that the Uyghur population does not grow. The Uyghur Tribunal, an independent investigative body, concluded this month that China is “beyond a reasonable doubt” committing genocide in Xinjiang.

Chinese officials claim the concentration camps are “vocational training” centers used to give impoverished Uyghurs job skills compatible with a developed China. The claim is incompatible with extensive evidence that many among the millions trapped in the camps are highly educated and were thriving in their communities as professionals before their arrests.

As the population of the concentration camps has decreased, Beijing has claimed that the concentration camp victims have “graduated” from “vocational training.” In reality, a study from the Australian Strategic Policy Institute (ASPI) found in early 2020 that China was selling concentration camp victims as slaves in racist online advertisements to Chinese factories and suppliers for as many as 82 multinational companies. Many of these factories using Uyghur slave labor are located far from Xinjiang, making international sanctions on Uyghur slavery more difficult to enforce.

Intel, which does much of its business in China, reportedly urged Chinese suppliers not to source materials or labor from Xinjiang to avoid being implicated in slave labor this week. Intel’s warning is particularly striking given that the company is part of the Olympic Partner Program, the most expensive form of sponsorship of the event. Human rights activists have called for sponsors to drop the 2022 Beijing Winter Olympics in response to the genocide of the Uyghur people, among other atrocities, but Intel has at press time ignored them. 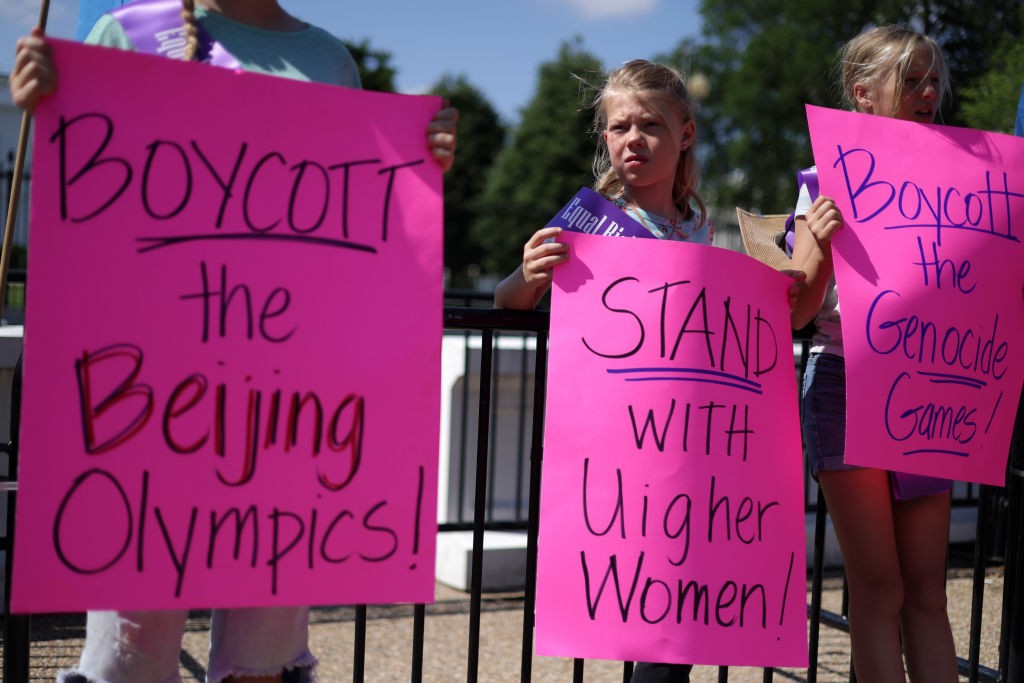 WASHINGTON, DC – MAY 27: Young girls hold signs as they participate in a demonstration against the 2022 Olympics in China, at Lafayette Square May 27, 2021 in Washington, DC. (Photo by Alex Wong/Getty Images)

Intel’s letter to its suppliers surfaced on Tuesday on Weibo, a Chinese government-controlled social media outlet that replaces banned sites like Twitter and Facebook for most Chinese citizens. The letter stated, in part, that Intel had a responsibility that trickled down to Chinese supplies to avoid “labor, purchased products, or services from Xinjiang” because the free world was increasingly sanctioning products from the region in response to mounting evidence of government-sponsored slavery there.

The letter surfaced shortly after the American Congress passed the Uyghur Forced Labor Prevent Act which, if President Joe Biden signs into law, would ban imports from Xinjiang unless companies explicitly proved that they were not tainted by slavery. The South China Morning Postnoted that Intel did not mention the specific bill, however, in its letter.

The Chinese government propaganda outlet Global Timesclaimed on Tuesday that Weibo unleashed a “tsunami of anger” at Intel in response to the letter in the form of allegedly independent Chinese “netizens.” The “netizens” demanded Intel issue a groveling apology for opposing slavery and restore its business with Xinjiang, the newspaper reported, and threatened a boycott.

Intel is in a unique position regarding boycotts because few consumers directly purchase Intel products. Intel’s computer chips are key components in many complex goods – mostly computers, but Intel has recently expanded to car and aircraft companies, meaning any attempt at a boycott would have to include every Intel customer.

“Intel is playing a double game. Its stance can be viewed as political posturing to score political points among anti-China politicians in the US,” a regime-approved “economist” denounced.

Another Global Times expert ominously opined that the Chinese Communist Party would soon “teach the US company a lesson in the coming months,” without elaborating. The newspaper noted that last year, “Intel generated $20.26 billion from the Chinese mainland and Hong Kong market in total.”

Hu Xijin, the recently “retired” former editor-in-chief of the Global Times, weighed in by dismissing Intel’s statement as symbolic, as Xinjiang is not a major hub of high-tech manufacturing.

“Intel dares to do so simply because there are very few Xinjiang products in its current supply chain, and its CPU is rigidly demanded in China. So Intel isn’t worried about retaliation from China,” Hu contended. The propagandist also admitted, somewhat begrudgingly, that American companies have the leverage to not submit to Chinese slave labor demands because “the U.S. is still stronger than China.” 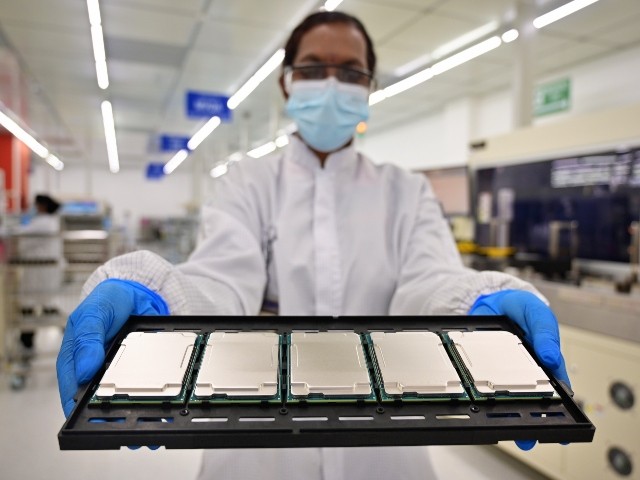 More prominently, however, Intel is an Olympic Partner, actively funding the 2022 Beijing Olympics – a major public relations coup for the Communist Party as it fields growing dismay over its poor human rights record. The top post on Intel’s Weibo page at press time is an advertisement for the Olympics.

“Intel has been promoting application development with technological innovation and bringing innovative applications to sports events,” the Weibo post reads in part. “Intel is actively fulfilling its firm commitment to creating a new and smart experience for the Olympic Games, continuing to promote the application of innovative technologies, and working with partners to present smarter … more exciting technologies at the Beijing 2022 Winter Olympics.”

As an Olympic partner, Intel participated in a hearing organized by the U.S. Congressional-Executive Commission on China (CECC) this summer on China’s human rights abuses and its participation in the International Olympic Committee (IOC). Its representative there, Executive Vice President Steven Rodgers, was the only one to agree with the U.S. government that the acts China is committing in Xinjiang amount to genocide.

AirBnB, Coca-Cola, Proctor & Gamble, and Visa also sent representatives to that hearing, who contended that they were supporting the athletes at the Games, not the host city.