China Dismisses Greta Thunberg as Uneducated for Calling Out Beijing

The Chinese government newspaper Global Times insultingly urged climate change celebrity Greta Thunberg to seek “a better education” on Monday after the Swedish teen listed pressuring China to cease being the world’s worst polluter as “not the least” of her concerns.

Thunberg noted China’s spree of coal plant building in an interview with the BBC broadcast Monday, calling China’s coal policy “out of touch with reality.” The activist arrived in Glasgow, Scotland, that day to protest the ongoing United Nations Climate Change Conference (COP26). In a fiery speech outside the event, she demanded politicians stop “whatever the fuck they’re doing in there” and focus instead on tangible solutions to what she has called a climate “crisis.”

Chinese dictator Xi Jinping did not attend the event, instead, hectoring participants in a speech from Beijing to improve their green records while promising China would continue to increase carbon emissions for nearly another decade. 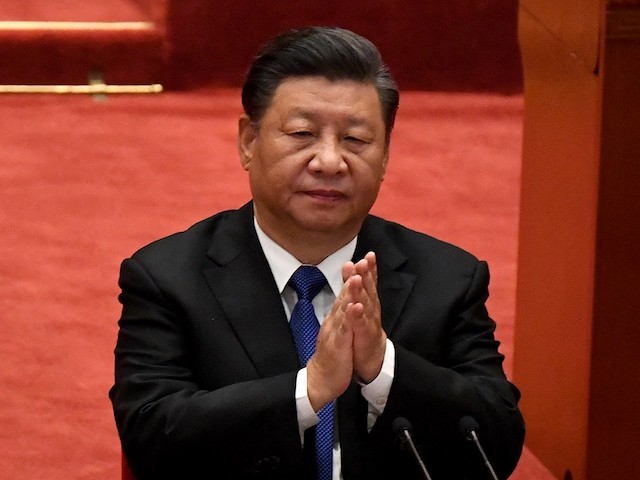 Chinese President Xi Jinping attends the commemoration of the 110th anniversary of the Xinhai Revolution, which overthrew the Qing Dynasty and led to the founding of the Republic of China, at the Great Hall of the People in Beijing on October 9, 2021. (Noel Celis/AFP via Getty Images)

In an interview with the BBC’s Andrew Marr, Thunberg admitted she found it challenging that, regarding global pollution, “you can always blame someone else.”

“I mean, it’s always someone that’s bigger than you that you can blame on. And that’s why it’s more important that we need to work together internationally and globally to make sure that everyone does this transition,” Thunberg said. “Not the least, pushing China, who are still building coal – coal power plants, which today is quite out of touch with reality if you ask me.”

Marr had specifically asked her about China’s deplorable pollution record. China is the world’s most prolific carbon emitter. In 2020, China increased its coal capacity by three times more than the entire rest of the world combined. Last month, in response to skyrocketing coal prices, China’s National Development and Reform Commission reportedly ordered the country’s mine operators to “produce as much coal as possible.”

Elsewhere in the interview, Thunberg criticized politicians for global fears that transitioning away from fossil fuels towards unproven “green” technology could cause an economic disaster.

“Of course, we understand. And that’s just the fact that there’s that kind of fear is just a clear sign that we have not been handling the climate crisis in the way it should,” Thunberg said, referring to those concerns, “because the way we need to [do that] is that no one gets left behind, and that the people are being taken care of. So of course, that’s, that’s a sign of failure from the politicians’ side.”

The Global Times published an infuriated column on Monday, attacking Marr for asking Thunberg about China at all and dismissing Thunberg as uneducated, a common insult from Chinese media referencing Thunberg’s campaign, “Fridays for Future,” which encourages students to skip school in protest of climate policy. China is home to only one internationally known participant in Fridays for Future – activist Ou Hongyi, arrested in 2020 for attempting to organize a protest against China’s excessive pollution. Thunberg sent a message of “solidarity and gratitude” to Ou at the time, again outraging China. 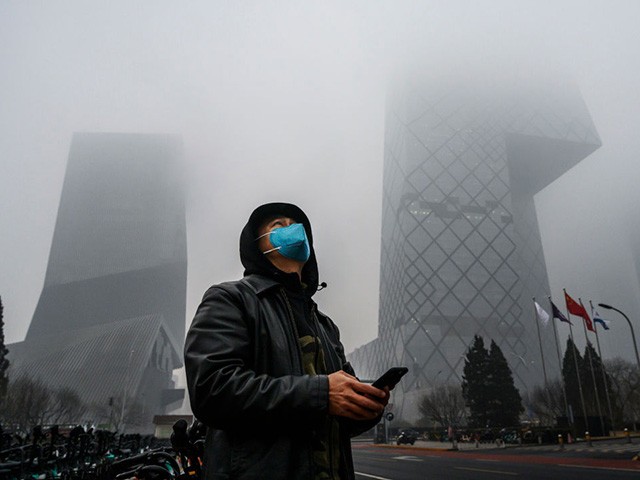 A Chinese man wears a protective mask as he stands near the CCTV building in fog and pollution during rush hour in the central business district on February 13, 2020, in Beijing, China. (Kevin Frayer/Getty Images)

“Thunberg, who skipped school for so-called climate protests at 15, has been portrayed as a devoted environmentalist in the West. She is a pretty good tool to divert public attention from the fact that the West is not doing enough to curb emissions,” the Times concluded. “She was nicknamed by Chinese netizens’ selective environmental activist’ and a ‘puppet’ of Western politicians after she blamed China for the global climate crisis while turning a blind eye to Japan’s decision to dump nuclear wastewater in May.”

Chinese “netizens” are social media users who parrot Communist Party talking points on Chinese websites, then used to claim popular support for these talking points. Contrary to the Times affirmation, Thunberg has highlighted Japan’s plans to release nuclear wastewater into the ocean from the destroyed Fukushima Daiichi Nuclear Power Plant and supportively shared footage of climate protests in Japan.

“Thunberg needs a better education and more knowledge to avoid being exploited by the West in its attempt to mislead public opinion,” the Global Times concluded of the teen activist.

The column also included some unsubstantiated defenses of China’s poor climate record, such as the claim that “global warming is mainly caused by developed countries including the U.K.” and that, given China’s usurpation of much of the world’s industrial output through its factories and slave labor facilities, “China is taking some shares of carbon emissions that should be counted as part of other countries’ emissions.” Neither are claims supported by mainstream climate science given the percentage of greenhouse gases China is responsible for, the fact that the emissions counted are released within China’s borders, and the fact that the Communist Party has a stranglehold on Chinese company practices that do not exist in the free world.

Thunberg has spent the vast majority of her brief career in activism protesting the climate policy of her native Europe and the United States, rather than focusing on major polluters like China and India. She has condemned Beijing in the past, however, infuriating state propagandists. In May, Thunberg criticized China for using its status as a “developing” nation – despite having the second-largest economy in the world – to demand other countries implement stricter limits on emissions while refusing to do so itself.

“Yes, China is still categorized as a developing nation by WTO [World Trade Organization] … But that’s of course no excuse for ruining future and present living conditions,” Thunberg wrote on Twitter:

Yes, China is still categorized as a developing nation by WTO, they manufacture a lot of our products and so on.
But that's of course no excuse for ruining future and present living conditions. We can't solve the climate crisis unless China drastically changes course.#MindTheGaphttps://t.co/00oV6uuvYE

The Global Times similarly attacked Thunberg then, stating she was a poor role model for young people for “skipping school” in Fridays for Future protests.

“She is short of sufficient academic knowledge study, and lack of sound self-judgment capability. Girl like her [sic] is prone to be affected or even manipulated by some political forces,” the newspaper asserted at the time.

Thunberg has elicited outrage from Beijing in the past for taking stances independent of the climate change debate, as well. Thunberg has maintained a public friendship with Joshua Wong, one of Hong Kong’s most prominent pro-democracy leaders who also began his career as an activist as a teenager. Thunberg wrote a blurb featured in Wong’s book Unfree Speech and has endorsed his campaigns urging China to respect the human rights of Hong Kong residents.

I’ve been nominated by @joshuawongcf to join this campaign. Post a picture of #SAVE12 & #SAVE12HKYOUTHS and tag 3 friends to spread the word.

Wong is currently a political prisoner in Hong Kong.