China Begins Walking Back Promises to Reduce Pollution in the 2030s

Communist China frequently placates climate activists by promising to cut pollution in the 2030s and strive for “carbon neutrality” by 2060.

The South China Morning Post(SCMP) on Monday quoted senior Chinese officials already walking back those promises, recasting them as vague aspirations that might have to be put on hold until Beijing achieves its industrial goals.

The climate change movement has always been remarkably credulous when it comes to China. At the big COP26 “climate summit” in Scotland in October, China actually “pledged” to increase its carbon pollution over the coming decade – but the response was mostly muted grumbling from activists who demand immense short-term sacrifices from the Western world.

At the conclusion of the Glasgow summit, the Biden administration released a joint statement on reducing carbon emissions with Beijing, hailed by climate envoy John Kerry as a “roadmap for our future collaboration.”

Two months later, the Chinese are backing away from that road map, as the SCMP reported:

Addressing a forum in Beijing on Saturday, former finance minister Lou Jiwei said that while China had said it would “strive to” reach peak carbon emissions before 2030 and carbon neutrality before 2060, there was a difference between this and “ensuring [those targets would be achieved]”.

“We are a developing country. We should bear common but differentiated responsibilities that are different from developed countries,” Lou told the gathering organised by the China Centre for International Economic Exchanges.

Han Wenxiu, from the Central Committee for Financial and Economic Affairs, was similarly cautious, saying the two targets were complex and long-term tasks that required full consideration of the country’s energy and industrial structure.

“[The carbon targets] should not affect the country’s overall economic and social development,” Han said.

The day before those comments were made, Chinese dictator Xi Jinping and his Politburo issued a statement that said reaching carbon neutrality will require “unwavering efforts,” but success “can’t be achieved in just one battle.” 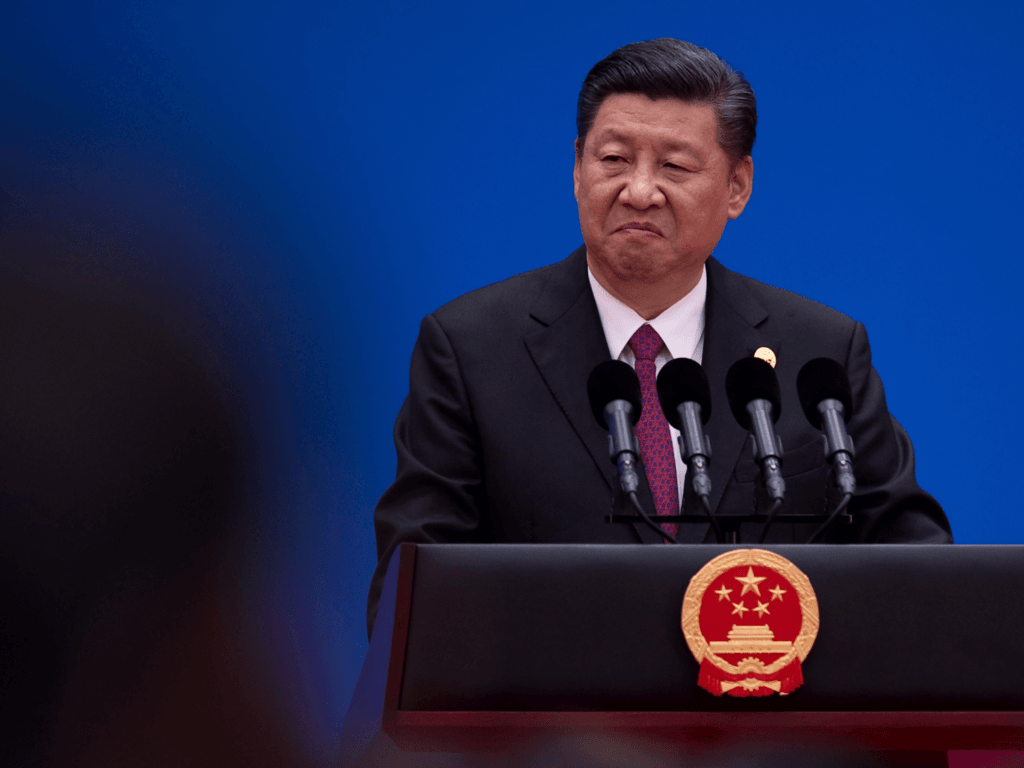 Chinese President Xi Jinping attends a news conference at the end of the Belt and Road Forum for International Cooperation on May 15, 2017 in Beijing, China. (Photo by Nicolas Asfouri-Pool/Getty Images)

The same statement made it clear that China will not stop burning coal to generate electricity. The Chinese are currently pouring record amounts of coal into record numbers of power plants to meet the soaring energy needs of their industrial sector. As several Chinese analysts explained to the SCMP, critical power shortages in the latter half of 2021 frightened communist leaders away from any thoughts they might have been entertaining about eliminating coal.

“Wind and solar power account for about 9 percent of China’s electricity generation. The dominant role of coal in China’s power and energy structure cannot be changed in a short time,” Lin Boqiang of the China Institute for Studies in Energy Policy at Xiamen University explained.

Ma Jun of the Institute of Public and Environmental Affairs in Beijing said the statement by Xi and the Politburo on Friday was a sign that “replacements have not been building up and we cannot phase out fossil fuels in a quick way.”

Ma thought the latest Communist Party statements on climate were nevertheless “meaningful” and carbon emissions would eventually be capped, but perhaps not on the timeline China has been promoting at the last few climate conferences.

David Meale, charge d’affaires at the U.S. Embassy in Beijing, insisted on Monday that China is still offering “engagement” and a “collaborative relationship” with the United States on climate change – but he indicated the U.S. was prepared to cut China a great deal of slack for its gigantic coal consumption.

“Coal is absolutely central to getting China to enhance its ambition and accelerate its timelines,” Meale said at an embassy exhibition of American “street art” related to climate change.

“When you have an economy that is overwhelmingly dependent on coal as a fuel and when you have enormous expertise that is capable of pointing out rather easy and straightforward ways to address that dependence, there is plenty of room for new ambition, plenty of room for speeding up the process to getting to that peak number, and for thinking about when and how to restructure the reliance on different fuel sources,” Meale said optimistically.

One of the assumptions behind Western environmentalists’ indulgence of China – generally unspoken, but strongly implicit in Meale’s remarks – is that Xi’s authoritarian regime can act more quickly and decisively than messy Western democracies, so it is not a big problem if China continues as the world’s worst polluter for another decade or two. When their industrial goals are achieved and they feel comfortable with letting go of coal, Xi and his Politburo can simply snap their fingers and make it so.

The SCMP’s quotes from Chinese officials make it plain that China’s willingness to compromise its industrial power in the name of climate change is questionable, there is no real plan in Beijing to hit “peak carbon” in 2030 or “zero-carbon” in 2060, and – even if Communist Party leaders do become interested in keeping the promises they made to the Biden administration – the sheer inertia of all that coal mining and coal plant construction would be hard to overcome, even for iron-fisted tyrants. After all, China still plans to build dozens more coal-fired plants next year.