New cases of coronavirus in the U.S. soared to their highest level on record Thursday, peaking at an average of over 265,000 per day as a surge driven largely by the highly contagious omicron variant continues unabated.

The peak arrived just over 12 months after then-candidate Joe Biden promised to contain the virus, mocking former President Donald Trump’s work to protect Americans from the infection in the process.

Biden promised he would enter the White house as the man with a plan.

We're eight months into this pandemic, and Donald Trump still doesn't have a plan to get this virus under control.

The latest numbers show the president has fallen well short of his lofty ambitions.

New cases per day have more than doubled over the past two weeks, eclipsing the old mark of 250,000, set in mid-January, according to data kept by Johns Hopkins University.

The fast-spreading mutant version of the virus has cast a pall over Christmas and New Year’s, forcing communities to scale back or call off their festivities just weeks after it seemed as if Americans were about to enjoy an almost normal holiday season.

Thousands of flights have been canceled amid staffing shortages blamed on the virus, as Breitbart News reported.

Coronavirus deaths in the U.S. have also climbed over the past two weeks from an average of 1,200 per day to around 1,500.

The World Health Organization (W.H.O.) reported new cases worldwide increased 11 percent last week from the week before, with nearly 4.99 million recorded Dec. 20-26. But the U.N. health agency also noted a decline in cases in South Africa, where omicron was first detected just over a month ago. 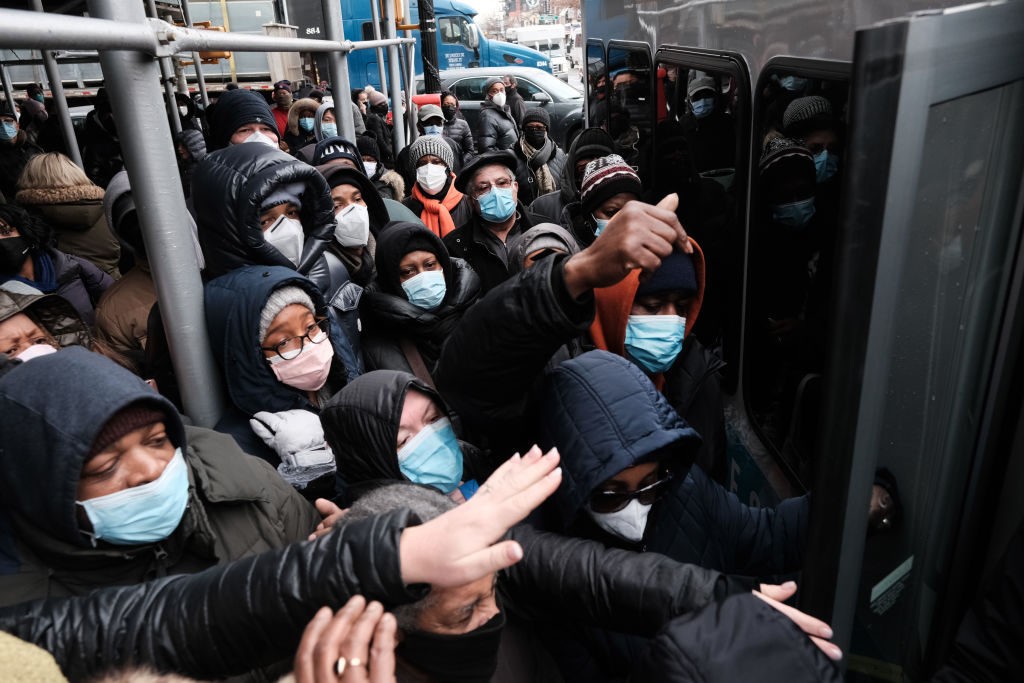 People form a large crowd as they attempt to receive COVID-19 testing kits from city workers distributing the kits along Flatbush Avenue on December 24, 2021 in the Brooklyn borough of New York City. (Spencer Platt/Getty Images)

Not only have numbers of infections been consistently rising since Biden took office, so too have his goals.

Biden left Monday for his beach vacation in Delaware after admitting in a video call with U.S. governors there was no federal solution to the coronavirus pandemic.

“Thank you very much. Look, there is no federal solution,” Biden said as he began speaking to the governors. “This gets solved at a state level.”