Bette Midler Commemorates January 6 Capitol Riot: 'The Shock to Me Was as Great as 9/11'

Bette Midler is the latest left-wing figure to equate last year’s January 6 Capitol riot to the September 11 terrorist attacks, which killed nearly 3,000 people — claiming both events left her in similar states of shock.

The Hollywood star, who recently had to apologize for smearing West Virginians as “poor, illiterate, and strung out,” commemorated the January 6 riot in a series of social media posts Wednesday. She called it “one of the most traumatic days in American history” and blamed former President Donald Trump and Fox News.

“Tomorrow is 1/6, one year after one of the most traumatic days in American history & life, the storming of the Capitol, incited by #DonaldTrump, in his desperate attempt to cling to power,” Midler wrote. “The shock to me was as great as 9/11.”

by a sociopath, so ignorant of the Constitution, so determined to win that he would destroy the government of his own country was the biggest shock of all. How stupid are we as a nation? How could so many be fooled by this buffoon? #RupertMurdoch#FoxNewsKnew#TraitorTrump

Equating January 6 to the 9/11 terrorist attacks has become a favorite rhetorical trick of the left and Never Trumpers, who have sought to portray the three-hour riot as one of the worst events in American history. 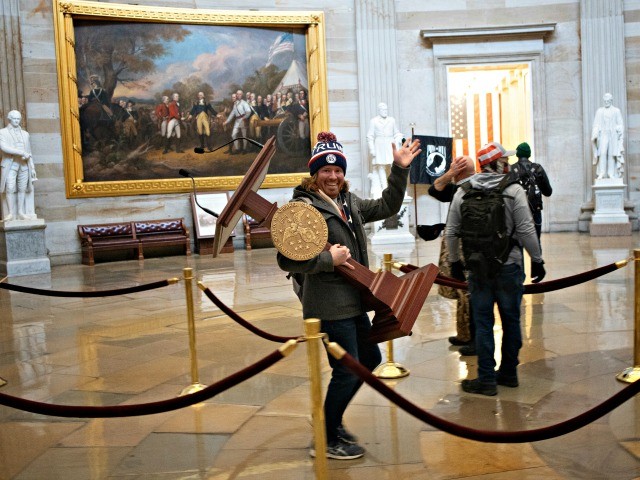 A pro-Trump protester carries the lectern of U.S. Speaker of the House Nancy Pelosi through the Rotunda of the U.S. Capitol Building on January 06, 2021. (Win McNamee/Getty Images)

President Joe Biden has used even more inflated rhetoric, calling the January 6 riot “the worst attack on our democracy since the Civil War.”

As Breitbart News has noted, there have been attacks on the Capitol far more severe than January 6. A Puerto Rican terrorist group opened fire in the House of Representatives in 1954, wounding five members in what USA Today has called “the most severe assault in the history of the Capitol building.”

By comparison, Congress was back at work just hours after the January 6 riot. No member of Congress was hurt during the event.

Bette Midler was recently feted at the annual Kennedy Center Honors. The actress-singer received a glowing tribute from President Biden during a pre-show reception. “I am such an unadulterated fan. Bette is a true American treasure,” the president gushed.