Compulsory mass coronavirus testing was ordered in parts of Beijing on Sunday following a runaway series of infections as China tightened anti-disease controls two weeks out from the Winter Olympics.

The government told citizens they must comply with the testing regime in areas of the Chinese capital deemed at high risk for infection. They also ordered locals not to leave the city after 25 cases were found in the Fengtai district and 14 elsewhere.

The ruling Chinese Communist Party is stepping up enforcement of its “zero tolerance” strategy aimed at isolating every infected person as Beijing prepares to open the Winter Games on Feb. 4 under intensive anti-virus controls, AP reports.

On Sunday, Fengtai residents lined up on snow-covered sidewalks in freezing weather for testing before being ordered to await further instructions.

No excuses were accepted for anyone seeking to avoid medical scrutiny, in line with China’s strict demands for social obedience before the games begin.

A Chinese official in charge of relations for the upcoming Olympics said that athletes who criticize China will be punished for speaking out. https://t.co/S0vLslWZqG

The Chinese capital must “take the most resolute, decisive and strict measures to block the transmission chain of the epidemic,” a city government spokesman, Xu Hejian, told a news conference.

He added the situation is “severe and complex” without elaborating further.

Starting on Sunday, residents who purchased medicines related to fever, cough, infections and dry pharyngeal pain within the past 14 days or in the future have to take a nucleic acid test within 72 hours.

Li Ang, deputy director of the Beijing Municipal Health Commission delivered the new decree at the conference, according to the Global Times. 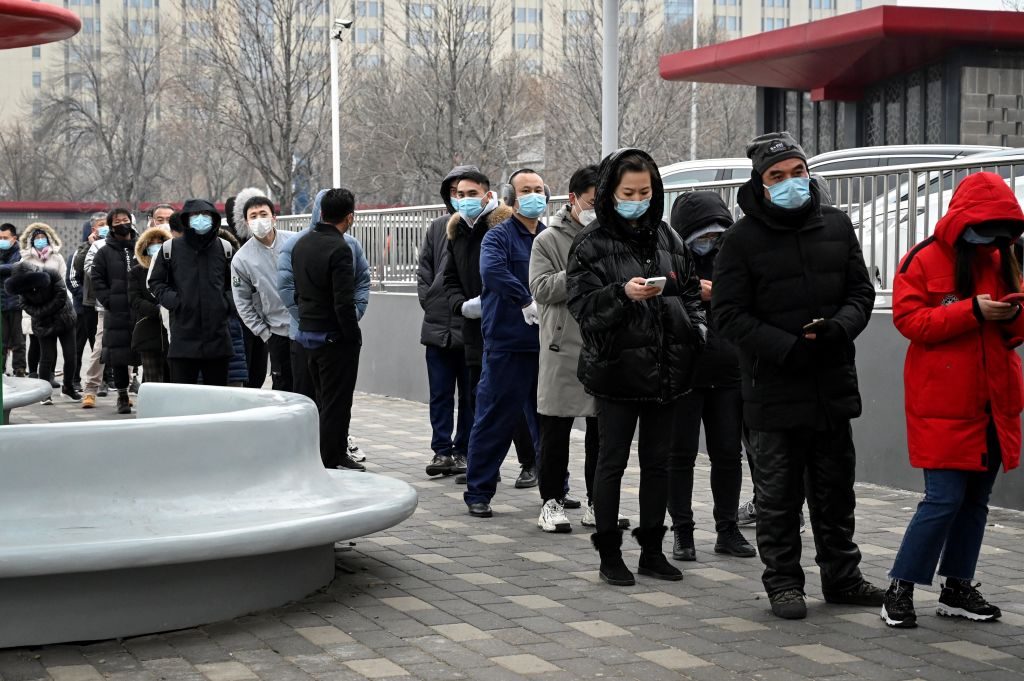 People line up to be tested for the Covid-19 coronavirus at a testing centre along a street in Beijing on January 21, 2022. ( JADE GAO/AFP via Getty Images)

The Olympics are being held under strict controls that are meant to isolate athletes, reporters and officials from the outside world. Athletes are required to be vaccinated or undergo a quarantine after arriving in China.

Other outbreaks prompted the government to impose travel bans on the major cities of Xi’an and Tianjin, as Breitbart News reported.