A pregnant journalist who was forced to rely on the Taliban’s charity in Afghanistan has finally been allowed to return home to New Zealand.

New Zealand’s decision to allow Bellis to bypass the waiting list and re-enter the country comes after she chronicled her story of being left stranded in Afghanistan in the New Zealand Herald on the 28th of January 2022.

That led to a public outcry and a call for New Zealand to reform its strict border laws to better accommodate its own nationals stranded on foreign shores.

Bellis has now been offered a quarantine spot by the New Zealand government and they claim to have set up flight arrangements for her, however, they deny the media attention on Bellis’ case had any influence on their decision, the BBCreports.

Deputy Prime Minister of New Zealand, Grant Robertson, announced at a daily coronavirus briefing that, “there is a place in managed isolation and quarantine for Ms Bellis” and that he wishes to “urge her to take it up”.

New Zealand currently requires citizens to quarantine for ten days in a “Managed Isolation Quarantine” where places are limited and highly competitive with “vouchers” being released “three months ahead of time” – non-citizens are largely prohibited from entering the nation.

There is an “Emergency Allocation” in place for people who need urgent entry into the country, but despite one of the allowances being “requiring access to time-critical medical treatment”, Bellis initially was rejected by the New Zealand authorities and told her pregnancy didn’t meet the “threshold of critical time threat“.

On the 31st of January 2022, the New Zealand government initially stood by their decision to not grant Bellis an exemption with the COVID-19 Response Minister Chris Hipkins saying officials had suggested Bellis amend her application or reapply under a different criteria. New Zealand’s government however U-turned on this decision within 24 hours.

Bellis had worked as Middle East news platform Al Jazeera’s Afghanistan correspondent, but was forced to resign in November 2021 when she realised she was pregnant, as where she was then based – in Qatar – it is illegal for an unmarried woman to be pregnant.

The journalist then flew to her partner’s native Belgium but was again forced to leave – this time due to her visa expiring before she could be guaranteed entry into New Zealand.

The only place to offer Bellis sanctuary was Taliban-controlled Afghanistan and despite her being unmarried and pregnant, Bellis was given protection in the rogue Islamist state by senior Taliban officials. 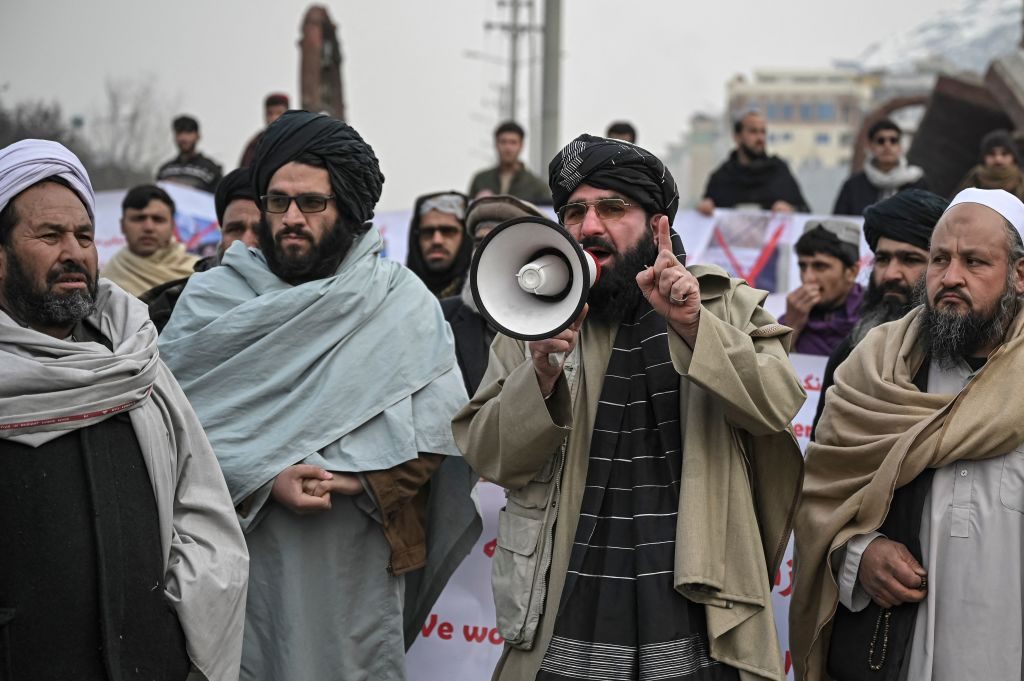 A member of the Taliban speaks during a demonstration to condemn the recent protest by the Afghan women’s rights activists, in Kabul on January 21, 2022. (MOHD RASFAN/AFP via Getty)

This move was unexpected by the Taliban who have reportedly persecuted the women of Afghanistan since seizing control of the once democratic nation in August 2021, following President Joe Biden’s disastrous military withdrawal.

It has been alleged that single mothers in Afghanistan have been harassed and some have been forced to give up their children, some women have been sold into sex slavery or married to Taliban fighters against their will, and Afghanistan has seen the return of the misogynistic Sharia Law that majorly restricts the rights of women.