Australia Bids Welcome to a Land Down Under: Reopens Borders to Tourists

Australian Prime Minister Scott Morrison announced Monday that Australia will reopen its borders to “double vaccinated” tourists from the 21st of February.

Australia has had some of the harshest coronavirus restrictions in the world, with nationals being barred from leaving for most of the time since March 2020 – a move that stranded Aussie nationals overseas, with families left unable to meet for important once in a lifetime events such as funerals and weddings.

Morrison announced during a press conference that following “almost two years” of border closure, Australian “borders will reopen to all visa holders”, and that Australia has already been, “progressively opening our borders since November of last year”.

He did emphasise however only those who are doubled jabbed will be allowed to enter saying: “The condition is, you must be double vaccinated to come to Australia. That’s the rule. Everyone’s expected to abide by it”.

Australia has now resorted to monitoring alcohol consumption and in some cases confiscating elicit drinks in areas under strict lockdown. https://t.co/ajxK5dBGNO

Currently, only those who are classed as an “immediate family member” from November 2021 or have been granted a visa, largely for work or asylum – which are extremely competitive – from December 2021, have been granted entry into the nation.

The tourist industry was decimated by the harsh isolation, which in 2019 brought in $60.8 billion to the Australian economy. The restrictions are estimated to have cost Australian businesses $2.6 billion per month the border was closed, as tourist numbers fell by nearly 98 percent. 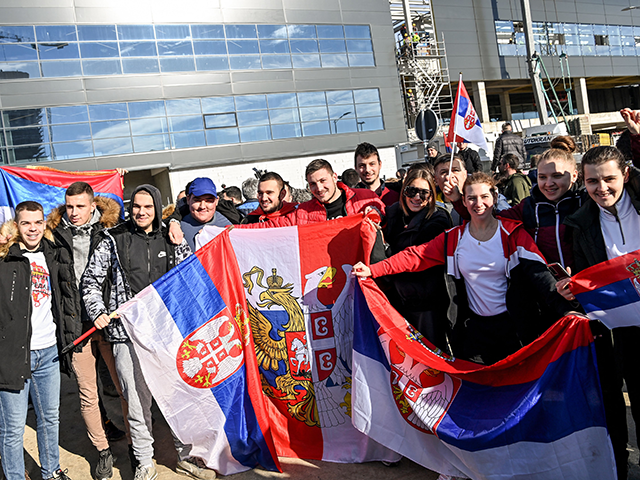 People holds Serbian national flags as they pose while waiting for Tennis world number one Novak Djokovic’s arrival home after his deportation from Australia over his coronavirus vaccination status. (ANDREJ ISAKOVIC/AFP via Getty)

The decision to reopen borders comes after Australia’s “Covid-zero” policy failed and was subsequently abandoned as the nation was overwhelmed with rising omicron cases – with even the left-wing paper The Guardian describing the policy as “naive“.

At one stage some state health authorities even publicly claimed the coronavirus and its restrictions were helping to rush through a new world order, as Breitbart News reported.

While Canberra has agreed to relax national entry requirements, travel to some Australian states – in particular Western Australia – will remain restricted with the six different states having autonomy over their entry and quarantine requirements.

The move to open the borders comes after tennis star Novak Djokovic dramatically had his visa revoked on a technicality, was interned in a migrant detention facility and eventually deported by the Australian authorities in January 2022 – preventing him from competing in the Australian Open tennis tournament.