Beijing officials have admitted to surging cases of both the omicron and delta variants of Chinese coronavirus, threatening the health of residents in the capital. Technology experts warned this week that the privacy of athletes and other sports personnel at the Winter Olympics is in significant risk due to the poor security features of a mobile phone application the Chinese Communist Party is forcing all Olympics participants to download; countries have advised athletes to purchase “burner” phones to take to China and keep their real phones at home.

The World Anti-Doping Agency (WADA) warned athletes this week that meat consumed in China may yield a positive test for performance-enhancing drugs due to the copious use of steroids on animals there, while Human Rights Watch suggested that athletes keep their opinions to themselves in the country about its atrocious human rights record lest they face forced disappearances or formal arrests.

Despite all the threats that American athletes will be facing at the Games – scheduled to begin on February 4 – the South China Morning Postreported on Wednesday that the White House will be supporting the communist Olympics event by sending 46 diplomats to Beijing. Biden’s administration had promised in December that it would engage in a “diplomatic boycott” of the Olympics. A “diplomatic boycott” is not a boycott, as diplomats play no meaningful role in the Olympics, but rather the retirement of diplomats from participating in Opening Ceremonies and other prestigious events.

Less than a month after announcing the “diplomatic boycott,” the Biden administration confirmed that American diplomats would be present at the Beijing Olympics. 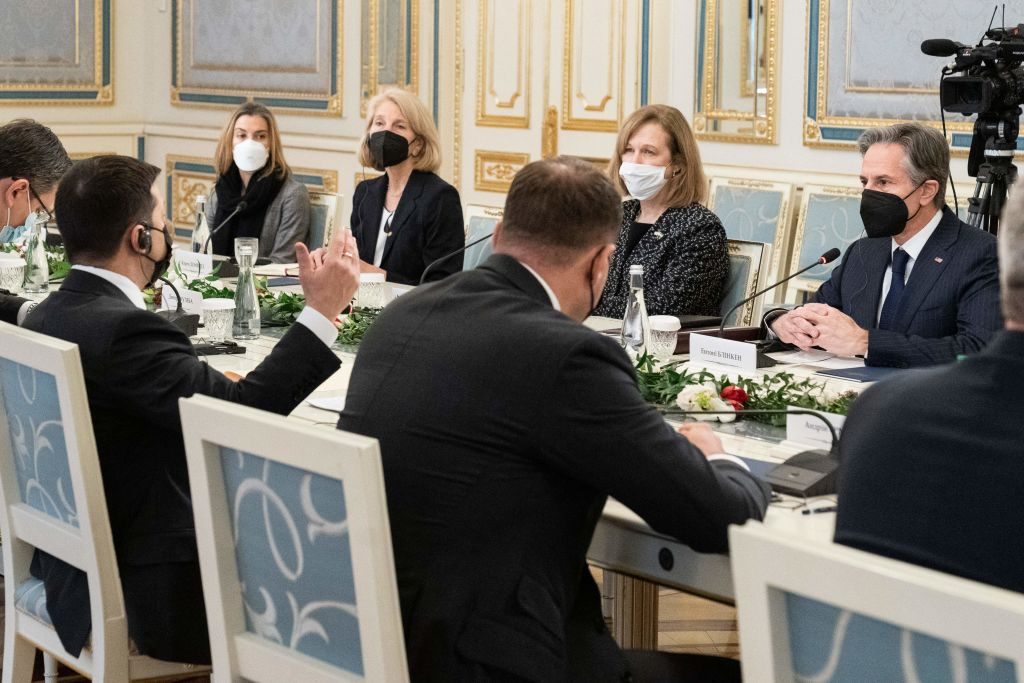 U.S. Secretary of State Antony Blinken (R) listens as Ukrainian President Volodymyr Zelenskiyy (L) speaks during their meeting at the Bankova, in Kyiv, on January 19, 2022. ( ALEX BRANDON/POOL/AFP via Getty Images)

Blinken, the nation’s top diplomat, addressed none of these issues while in Kyiv on Wednesday. He was instead there to discuss the alleged threat of a further Russian invasion into the country. Russia colonized Ukraine’s Crimean peninsula while Biden was vice president and has since used unofficial “pro-Russia separatists” to wage war on the nation’s eastern border. Moscow insists the Donbas conflict is a “civil war,” but the Ukrainian government asserts it has extensive evidence of Russian involvement there.

Speaking to American diplomats at the U.S. embassy in Kyiv, Blinken asserted that Putin could invade the country “on very short notice.” He appeared to acknowledge that many Americans are baffled as to why the State Department has prioritized Ukraine, where no significant changes have occurred on the eastern battlefield for years, over other, more pressing global issues.

“And when some of our fellow citizens back home ask us why are we so focused on this, not just now but back in 2014 when Russia went into Crimea and then into the Donbas – why is this something that the United States has to focus on?” Blinken remarked, “and the answer is this: Of course it goes to the feelings we have for Ukraine, the partnership that so many of you have been building over these years, but it’s also bigger than Ukraine.”

Blinken asserted that failing to focus on Ukraine over more important geopolitical issues, and potentially allowing an opening for the current Russian invasion of eastern Ukraine to expand, would “open a very large Pandora’s box, and the entire world is watching what is happening here.”

Ended negotiations with @SecBlinken. I appreciate personal involvement in the de-escalation of the situation around 🇺. Grateful for 🇺🇸's political & security support. Count on enhancing economic & financial cooperation. I'm sure there will be no decision about 🇺 without 🇺. pic.twitter.com/MNGvHqBKE2

Blinken’s presence in Kyiv follows months of disrespect from the White House towards Zelensky. Zelensky and his administration have repeatedly stated that, while they appreciate military aid, their one top request of the U.S. government is to sanction the Nord Stream 2 pipeline project, a German-Russian endeavor that would essentially ice Ukraine out of the fuel industry in Europe and greatly enrich the Putin regime. Biden refused to impose sanctions this summer, a move Zelensky said he was “unpleasantly surprised” by.

Zelensky also requested that Biden meet with him in person before meeting with Putin, a request Biden ignored, repeatedly snubbing Zelensky while meeting with anti-American dictators like Putin and Turkish President Recep Tayyip Erdogan.

When Biden finally met with Zelensky at the White House, he harangued the Ukrainian president about “climate dialogue.”

The State Department has focused significantly more energy towards the relatively static situation in Eastern Ukraine than to the dangers American athletes face in the Beijing Winter Olympics. The potential for athletes to be arrested for acknowledging China’s human rights atrocities is particularly noteworthy given that some have already made political statements that would be criminal in Beijing.

“What I can say is we absolutely acknowledge the horrifying things that we’ve seen happening to the Uyghurs. I read somewhere the other day that it’s the largest number of people held in internment and labor camps since World War II,” American figure skater Timothy LeDuc said following confirmation of joining the U.S. team this month. “I mean, these are horrifying human rights abuses that we’re seeing happening. And it can feel very powerless when you read those things, because you think, ‘What can I do?’”

China is currently engaged in what both the Biden administration and that of predecessor Donald Trump have deemed a genocide against the Uyghur people of East Turkistan, forcing millions into concentration camps and sterilizing entire villages of women to prevent the Uyghur population from growing.

As America’s first openly non-binary Olympian, LeDuc would have faced potential political repercussions in China for that identity on its own, as China recently declared war on what it deemed “sissy men and other abnormal esthetics,” banning them from television. It is unclear if Chinese broadcasters will carry LeDuc’s performance at the Games.

Another American athlete, snowboarder Shaun White, recently posed with a human rights activist holding a Tibetan flag; possession of the Tibetan flag is a crime in China.

“There’s really not much protection that we believe is going to be afforded to athletes … So we’re advising athletes not to speak up,” Rob Koehler, the director-general of Global Athlete, an advocacy group for “positive progress,” said this week. “We want them to compete and use their voice when they get home.”

Global Athlete has condemned the International Olympic Committee (IOC) for jeopardizing the safety of athletes by insisting on granting Beijing the honor of hosting the Winter Olympics.

“In addition to the stress of Covid-19 [Chinese coronavirus], the IOC awarded the Games to China, a country recognized internationally for its human rights violations,” a Global Athlete statement this month read. “This unfairly makes athletes pawns in a geopolitical fight. The IOC is to blame for putting athletes in this position; no athlete can be faulted for their choice to attend or not attend the Games.”